National films competing for the “Golden Dolphin” at the 10th Bosphorus Film Festival, ready to meet cinemagoers on October 21-28, have been announced. 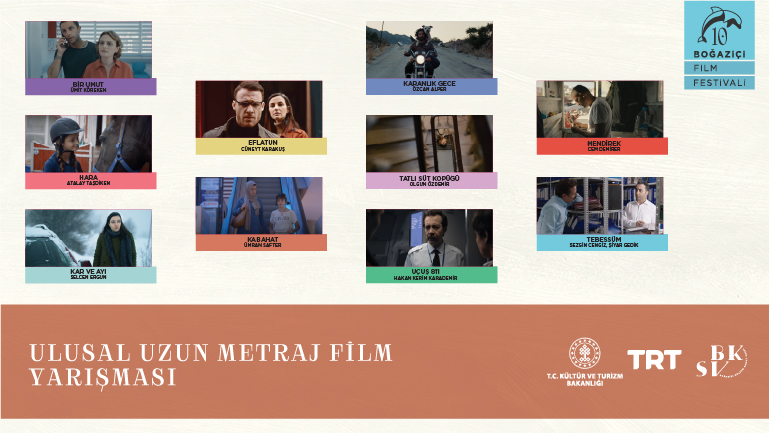 Organized by the Bosphorus Culture and Arts Foundation, the 10th  Bosphorus Film Festival will meet cinemagoers on 21-28 October. Bringing together audiences with distinguished examples of Turkish and world cinema, masterclasses and discussion sessions, the films competing for Best Film Award in the 10th Bosphorus Film Festival National Feature Competition have been announced.

Films competing in the National Feature Competition are; Ümit Köreken’s “A Hope” which had its world premiere at the 44th Moscow Film Festival, about a boy named Umut who wants to become and actor but his life changes in forty two hours when his mother coping with MS disease sudddenly shows up; Cüneyt Karakuş’s “Eflatun” about a blind woman since childhood named Eflatun, waiting for a man whose voice she fell in love with while working at a clock repair store inherited from her father; Atalay Taşdiken’s “Hara” about Beste, who grew up on a horse ranch, standing against the closure of the ranch while her favorite horse gets sold and her family faces separation;  Ümran Safter’s “The Guilt” about a 13 year old girls’s summer vacation to the village where she has her first menstrual period and consequently has to navigate through all the stigma and shame attached to menstruation by many communities; Selcen Ergun’s “Snow and the Bear” which had its world premiere at the 47th Toronto Film Festival, about the intertwined power relationships, secrets, and doubts a young nurse faces during her compulsory service at a remote village where winter never seems to end; Özcan Alper’s “Black Night” about a wandering musician named Ishak who returns to his hometown 7 years later and faces his past and struggles with the guilt weighing upon him; Cem Demirer’s “Breakwater” which had its world premiere at the 46th Atlanta Film Festival, about two fisherman cousins who live on an island refusing to face their own personalities, a hidden secret and one of the cousins slowly developing paranoid obsessions; Olgun Özdemir’s “Cream In My Coffee” which had its world premiere at the 44th Moscow Film Festival, about a woman who just returned from England to Türkiye and a man who avoids facing his traumas, working together on an incomplete book; Sezgin Cengiz and Şiyar Gedik’s “Smile” about the absurd events of Mustafaknown for being an unpleasant person who never smiles, and his father’s amputated leg; Hakan Kerim Karademir’s “Flight 811” about a couple going from Istanbul to New York for an auction while a suspicious death changes the fate of all passengers on the plane, filmed in Türkiye and set entirely on a plane.

The films “Eflatun”, “Smile” and “Flight 811” in the National Feature Competition will have their world premieres at the 10th Bosphorus Film Festival.

Debut Films In The National Competition

To support filmmakers in the beginning of their careers and their new films, “Eflatun”, “The Guilt”, “Snow and The Bear”, “Breakwater” and “Flight 811”, all of which are the directors feature debut, will be competing for the Best Debut award in the national competition with the contributions of Akli Film.

The Festival’s Teaser Is Out Now!

The teaser of the festival’s 10th edition has been released, with modern textures highlighting its dynamism and naturality. Originated from the poster, it features the amazing scenery of Istanbul with patterns resembling the Bosphorus and dolphins as the symbol of the festival.

Tickets On Sale On October 17!

Tickets for the 10th Bosphorus Film Festival, ready to meet cinemagoers on October 21-28, will be on sale on October 17.

Snow and the Bear – Selcen Ergun

Cream In My Coffee – Olgun Özdemir