National Competition jury members have been announced for the 10th Bosphorus Film Festival, ready to meet cinemagoers on 21-28 October. 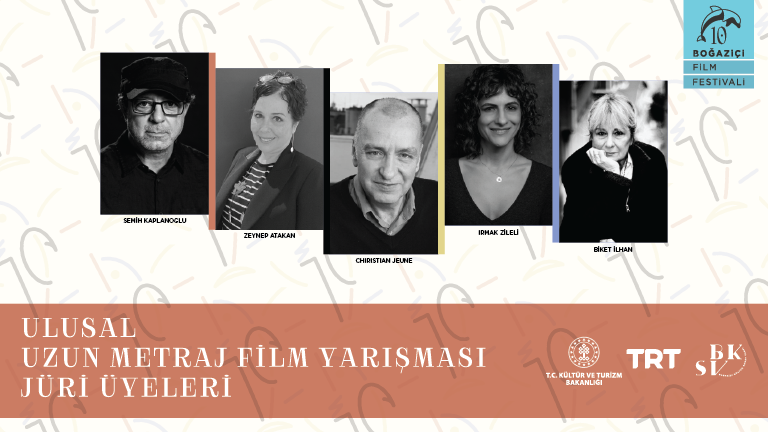 Jury President for this year’s festival is the highly acclaimed Turkish director Semih Kaplanoğlu. He won Best Director Award at the Singapore International Film Festival with his first feature film Away From Home; Kaplanoğlu worked on the Yusuf trilogy between 2005 and 2010 and won the Golden Bear Award at the 60th Berlin Film Festival with the last film of the trilogy, Honey.

The National Competition jury members are; Christian Jeune who is the Deputy to the General Delegate and Director of the Film Department at Cannes Film Festival; member of Academy of Motion Picture Arts and Science, European Film Academy, and the Asia Pacific Screen Academy Zeynep Atakan who was awarded the European Film Academy’s Best European Co-Producer Award in 2010 and won the prestigious Palme d’Or Award at the 67th Cannes Film Festival with Winter Sleep which she produced, director Biket İlhan who made the films The Man in the Street, The Blue-Eyed Giant, The Miracle and Çelo and writer and anthropologist Irmak Zileli who won the 2012 Yunus Nadi Novel Award for her novel Eşik and the 2020 Duygu Asena Novel Award for her novel Son Bakış.

Alongside the category awards, the Film Producers’ Professional Association (FIYAB) will be giving a money prize for FIYAB Best Producer Award at the 10th Bosphorus Film Festival national competition.

SIYAD Award Will be Given In Memory Of Agah Özgüç!

For the first time this year, the Turkish Film Critics Association will be giving the SIYAD Award in the national competition in memory of film critic Agah Özgüç who passed away in April this year. The jury consists of film critics Ali Can Sekmeç and Ali Ulvi Uyanık and director Engin Ayça who won the 2022 SIYAD Honorary Award.

Jury members for this year’s FİLM–YÖN Best Director Award given by the Film Directors Association in the national competition are; director Raşit Çelikezer who had the world premiere of his film Can at the Sundance Film Festival winning the Jury Special Prize; secretary general of the Turkish Cinema Foundation Aydın Sayman who won awards at numerous international film festivals with Children of Secret and Janjan and Kubilay Erkan Yazıcı who directed the film Faraway Land.