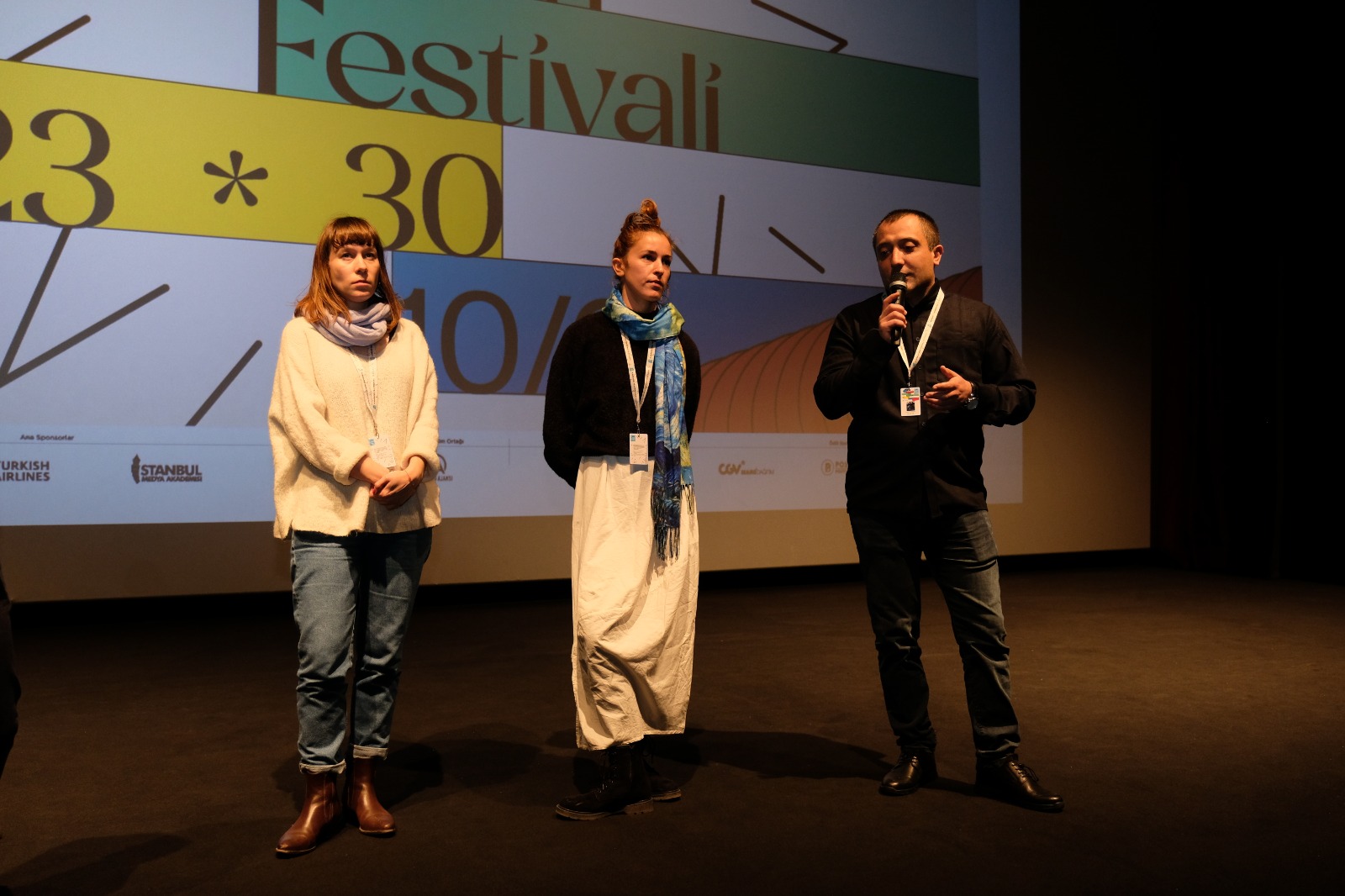 International short documentary competition films were screened on Thursday, October 28 at Atlas 1948 Cinema. Q&A sessions were also held after the screening of the films in the International Short Documentary Competition; Ben Donateo’s “Burnt. Land of Fire”, Anna Artemyeva’s “Don't Hesitate to Come For a Visit, Mom”, José Magro’s “My Dream”, Dorota Migas Mazur’s “Raisa”, Luigjina Shkupa’s “Sigurimi”, Maria Semenova’s “The City Of The Sun”, Fariz Ahmedov’s “The Last One”, Gailė Garnelytė’s “The Robot and The Butterfly”, Katarzyna Warzecha’s “We Have One Heart” and Katarina Jazbec’s “You Can't Automate Me”. Festival Coordinator Berfin Demirat moderated the event.

Dorota Migas Mazur the director of “Raisa”, Luigjina Shkupa the director of “Sigurimi” and Fariz Ahmedov the director of “The Last One” participated in the Q&A session of the films screened in the first part. On being asked about what the real aim of the story was, Mazur said she wanted to portray a strong woman. Shkupa was asked whether the shelters in Albania, which still exist, continue to cause fear or not, and she replied that this was still an important cause of tension within Albanians. Ahmedov was the last to speak at the first part. When Ahmedov was asked about the starting point of the story, he replied in Turkish. He pointed out having another film with the same topic, they planned to film for a longer period but the character died on the fourth day.

Katarina Jazbec the director of “You Can't Automate Me”, Katarzyna Warzecha the director of “We Have One Heart” and Gailė Garnelytė the director of “The Robot and The Butterfly” participated in the Q&A session of the films screened in the second part. Warzecha was asked,“How was the story shaped?” and she replied saying that the events in the film happened to a close friend of hers and she was the only director around to shoot the film. Complimented on the editing and asked about her motivation, Jazbec firstly pointed out that the pier in the film was one of the biggest in the world, that this influenced her and that she wanted to express the emotions she felt physically which is why she made the film this way. She was asked “How were the workers at the pier persuaded to dance?” and replied, “They wanted to be recognized all over the world.” Lastly Garnelytė was asked about the character’s relationship with music and ties she had with her, she replied, “We went to school together and we are good friends. She is very good at balancing motherhood and her career. At the same time, she is a teacher and continues to go after her dreams.”

The screening of Things Worth Weeping For selected for the International Feature Competition took place on Thursday, October 28 at Atlas 1948 Cinema. A Q&A session was held after the screening under the moderation of the festival’s international film programmer Onur Sherifi. Director Cristina Grosan and writer-actor Nora Rainer-Micsinyei participated in the event.

About the story of people in their 30’s who try to meet serious grown-up expectations when their lives do not actually have much in common with typical adulthood, the first question asked about the film was how the idea came out. Director Grosan said, “The beginning of the story was something that happened to me. Together with a friend of my mine, we just sat in the same house all night after her grandfather died. I wanted to write something about it,” and that they started off by thinking about how 30’s should be and how it should be lived together with writer-actor Micsinyei.

On being asked whether the choice of patterns was deliberate, Grosan replied, “It was not deliberate. Romania and Hungary were under the rule of the Ottoman Empire for 600 years. I always lived with this culture, it became a part of my life.” Asked about the difficulty of playing the character, Micsinyei replied, “Two years was a long preparation period for the character, I had a lot of time to get ready. The character also had parts of me in it. This reflected on the script.”

The screening of The Sacred Spirit selected for the International Feature Competition took place on the evening of Thursday, October 28 at Atlas 1948 Cinema. A Q&A session was held after the screening under the moderation of the festival’s international film programmer Onur Sherifi. Director Chema Garcia Ibarra, one of the producers Enes Erbay and head of production design Leonor Diaz participated in the event.

Director Ibarra was first to speak in the Q&A session and talked about the starting point of the film on José Manuel, a man with an ordinary life, attending the weekly meetings of the ufology association and him being the only person left who knows the cosmic secret after the death of their leader. Ibarra said, “I came up with it while watching TV ten years ago. There was an interview about a formation in the city where the film is set. It was a formation organizing extraordinary events. The group consisted of people interested in UFOs,” and added that people in the story were completely unrelated with each other.

The director was asked about the difficulties they faced with all actors being amateurs, he replied, “There was a professional on set to work with the children. Nothing special was done with the adults because they had to be natural.” He expressed that they only told the actors what they did not want to be done while preparing for a scene. The director ended his words by saying that their main goal was to bring together realistic and surreal events with balance.

Turkish co-producer Enes Erbay was asked how he became part of the project. Erbay said they worked together on a short film project before. He said they later applied for a ministry fund and added, “I was very impressed by the script. Parts of the production took place in Turkey.”