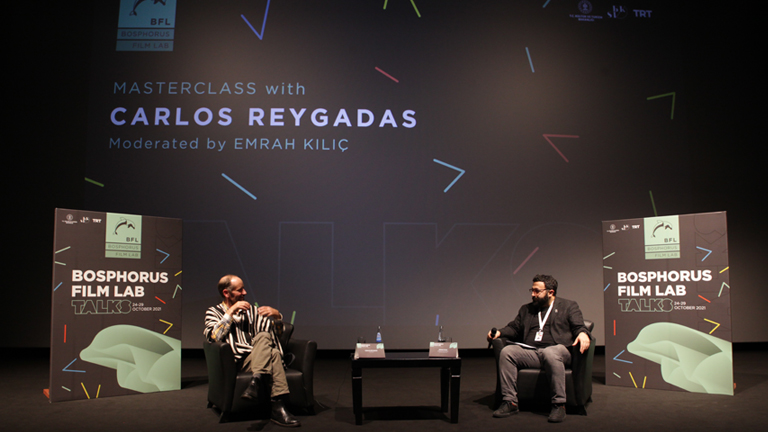 The Mexican director talked about his experiences and answered questions at the event held on Friday, October 29 at Atlas 1948 Cinema. The moderator for the event was Bosphorus Film Festival Artistic Director Emrah Kılıç.

“If you want to create a story, you have to create meaning.”

The Festival’s honorary guest Reygadas, who will receive the Honorary Award at the closing ceremony, started his words by saying that in cinema he seeks to find and deeply feel and understand the artistry of cinema, not just the art of storytelling. The director stated that the essence of cinema was being ready when the shooting started and said, “That is what I try to do. If you want to create a story, you have to create meaning. Cinema is about passion for vision. It is about feeling the warmth and the action.”

On being reminded about the importance of time in his films, Reygadas said, “Time is an important object in cinema. Just like it is in literature. Notional pictures and presentation images can bring out a concept and the platonic level of meaning can find its way when these pictures diffuse into the story.” The director added that the concept of time could have little meaning like in traditional Hollywood films and it could take time for it to become part of something real. Reygadas said that all these were meaningful and related to meaning, that cinema should be full of people who give meaning to it and not just do something randomly.

“I ceased everything and made a film.”

One of the participants asked “What feeds your creative side? Do you decide on a concept and shape your films according to it?” and Reygadas replied that he did have a concept in general and he advanced with emotions rather than ideology. Reygadas continued, “Let’s think about it like a cloud, we have to fill it in but with what? Of course, with something that comes from within me. With all my heart I believe we could create this just like we create our dreams.”

Reygadas was asked about the process of his first film and what he felt, he replied, “I was actually a lawyer who liked his job, but not the way lawyers lived. I was upset and felt that I wanted another life. I thought about what I could do and because I had been watching films since I was 17, I asked myself ‘Could I?’ ‘Could I become a good filmmaker?’ I had no idea. I ceased everything and made a film.”