The excitement of the 9th Bosphorus Film Festival continues on the fifth day with Q&A sessions with the participation of crew members of films in the National Feature Competition and National Short Fiction Competition at Atlas 1948 and Kadıköy cinemas. 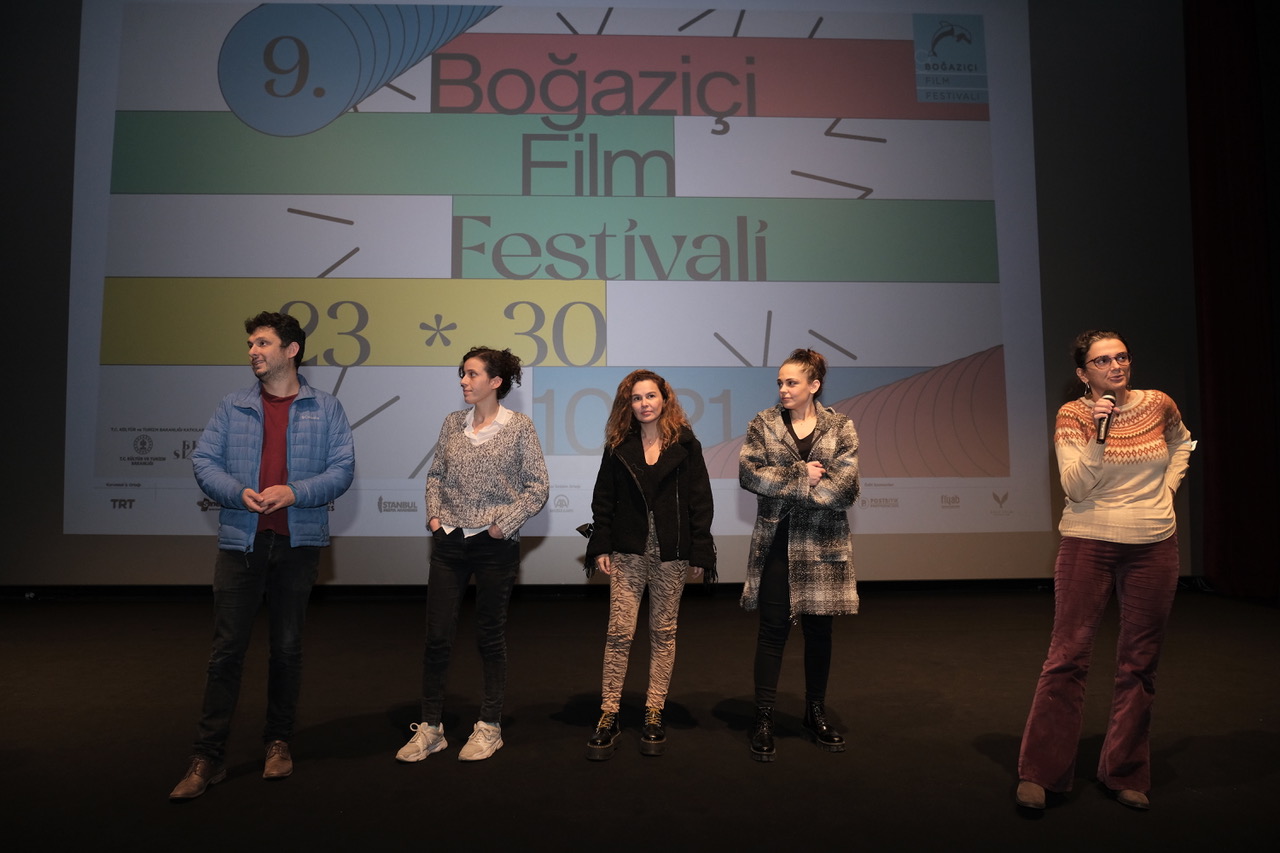 Firstly, director Elif Eda Karagöz, lead actress Gülşah Büktür and the production crew for the film “Jülide” came on stage. Director Karagöz said that one night Jülide and Kaan started talking in her head and she immediately started writing. Karagöz stated, “The stories in my head are impossible to make without support that they are unique in their own style. Besides, I like simplistic forms rather than exaggeration that I like to effect people that way. I like minimalism.”

Next in row, director Adar Baran Değer answered the question on behalf of the “The Cold” film crew. He answered the question a viewer asked about the poster saying that “A friend of ours named Erdem Kallavi made it. He is a designer, we worked together on the poster and the film.” Değer concluded his words by saying that he thought of making a feature film, this script was actually a feature film but they shortened it, and that one day he wanted to make a feature film whether for this story or something else.

Director of “Lifeline” Abdullah Şahin said that there is no absolute good or bad in life, they just used it for the film and although not greedy, the character chooses to follow a comfortable path.

On a question from a viewer, “Same Night Different Blue” film’s director Nuri Cihan Özdoğan replied, “A film noir scenario did come to my mind while writing. We were able to capture this with neon lights. We saw similar things in films we took as a reference and wanted to try new things.”

Later on, “High Altitude Or Awkwardness Of The Things” film crew took the stage. The director Emir Külal Haznevi said, they were not convinced when they started writing the film bu later on gained support. Haznevi pointed out that he waited for a long time, and shot the film in eight days.

Director Merve Bozcu attended the Q&A session for the film “Plastic Dream”. Bozcu said that, when she became thirty she was devastated by the effect of social media, that the beauty standards became a must-follow and put pressure on women.

Ramin Matin,  the director of “Dissonance” was asked about their success in conveying the feeling of being trapped and whether it was real or not, he replied that “We wanted to do something while sticking around at home. Being at home was our motivation.”

Director Belkıs Bayrak answered questions on the film “Cemile”. Bayrak said that as a child her parents sent her to a karate course and added that “They wanted me to physically feel strong.” The director said that now, she sends her own child to kickboxing and added that “My child is naive and has to learn martial arts. These two memories formed a bridge to create the film. The starting point of the film was understanding why they always impose success, strength and the will to be appreciated on people.”

“Don’t Be Afraid Of Me” film’s director Recep Bozgöz and writers İdil Ademir and Öykü Çetin took the stage. The director said that the story was inspired by Murathan Mungan’s poem Terastaki Havlu. Ademir added, “We were uncomfortable with something about will, we wanted to work on it, and advanced from that point.” On the other hand, Çetin said, “We worked on it for a year and a half, we put thought into it. We focused on the borders of will, where it started and where it ended, things like that.”

Lastly, producer of “The Diamond Sea”, Sinan Kesova took the stage. Kesova said, “Our director walks a lot. The starting point of the film is a person who walks 1-2 hours a day. It came out based on anecdotes.”

On the seventh day of the 9th Bosphorus Film Festival, film screenings for the International Feature Competition and director Carlos Reygadas’ event will be held.

Screenings at Atlas 1948 Cinema will be Wei Shujun’s “Ripples Of Life” at 1 p.m., Hajni Kis’s “Wild Roots” at 4p.m sessions. At 6:30 p.m. director Carlos Reygadas will meet with cinemagoers at a Masterclass event and screening of Will Sharpe’s “The Electrical Life Of Louis Wain” will be at the 9.p.m. session

Screenings of the 7-day Bosphorus Film Festival will be held physically at Atlas 1948 and Kadıköy cinemas.