WINNERS OF THE 9TH BOSPHORUS FILM FESTIVAL HAVE BEEN ANNOUNCED

The 9th Bosphorus Film Festival hosted cinemagoers under social distancing rules in cinemas on 23-30 October, and Golden Dolphin winners were announced at the awards ceremony on the evening of October 30. 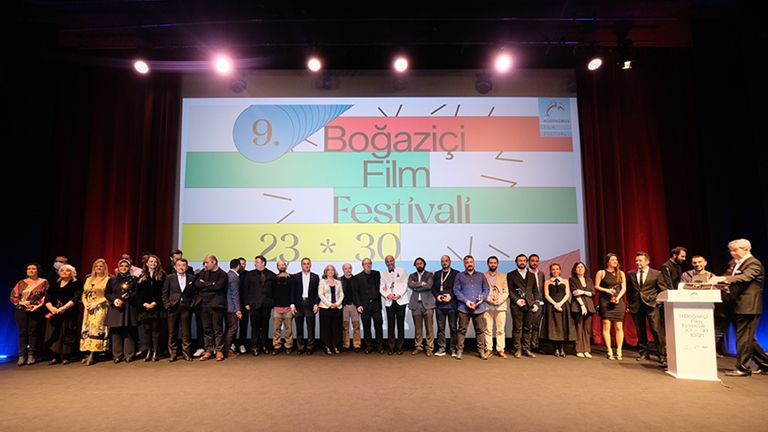 With the contribution of the Republic of Turkey Ministry of Culture and Tourism Cinema General Directorate, official partnership of TRT, support of Global Communications Partner Anadolu Agency, corporate hosting of Beyoğlu Municipality and organized by Bosphorus Culture and Arts Foundation, the 9th Bosphorus Film Festival held on 23-30 October ended tonight (October 30) with the awards ceremony at Atlas 1948 Cinema. “Commitment Hasan”, directed by Semih Kaplanoğlu won 100.000 TL worth Golden Dolphin award in the National Feature Competition for the Best National Feature Film. Wei Shuju’s “Ripples of Life” won the Best International Feature Film award in the International Feature Competition. The projects that will be supported by Bosphorus Film Lab were also announced. Korhan Abay presented the ceremony.

Film crews, guests and press members attended the awards ceremony in accordance with the pandemic rules. Bosphorus Film Festival Artistic Director Emrah Kılıç made the opening speech. Kılıç started his words saying, “I would like to thank every single one of you. Everyone here should be proud of the festival because it happened with everyone coming together,” and he continued, “It has been a very good festival. You do not realize it while you are working on it, but these are my thoughts now. A lot of effort was put in. We will prepare a special festival for our 10th edition. I hope the pandemic will be over by then.”

Kılıç thanked the jury members who watched and evaluated the films and the cinemagoers who came to cinemas. He also thanked the Republic of Turkey Ministry of Culture and Tourism and TRT and all sponsors for their financial and moral supports. Kılıç stated, “I would once again like to thank the sponsors, contributors and my colleagues in front of everybody,” and ended his speech by congratulating the award winners.

At the 9th Bosphorus Film Festival closing ceremony, Mexican director of films including Japon, Battle in Heaven, Silent Light and Post Tenebras Lux, Carlos Reygadas was given an Honorary Award.

Bosphorus Film Festival President Ogün Şanlıer presented the award to Reygadas. In his speech Şanlıer said, “Courageously expressing the concepts of time, morality, human and the defeats of human against civilizations, the acclaimed representative of Mexican and new-wave cinema, I would like to invite Carlos Reygadas on stage to receive his award.” Accepting his award, the Mexican director Reygadas said, “I would like to thank everyone. I feel as if Turkey is my second home.”

The Best National Feature Of The Year: “Commitment Hasan”

National Feature Competition Jury head by the Jury President Reis Çelik and consisting of directors Çiğdem Vitrinel, Erdem Tepegöz, actress Vildan Atasever and director of photography Gökhan Atılmış selected “Commitment Hasan”, directed by Kaplanoğlu as the Best National Feature Film of the year. The reason was stated by Reis Çelik as “It was difficult to decide. A director or a film must be able to have a strong perspective in questioning even its own beliefs and contribute to the depths of human and to every culture in the world. This was seen in all the films, but we looked for more and found it in Commitment Hasan.”

Accepting his award from the Jury President Reis Çelik, Semih Kaplanoğlu said, “I would like to thank Reis Çelik and the jury, to everyone that made the festival possible, my wife, my co-producer and all my friends who contributed to the film. Nowadays, it is difficult to make films, especially long-lasting ones. The culture industry causes us to forget everything. It shields us from being able to vision. We are always after the truth. Our aim is to take a journey to genuine human soul and be able to touch it. I hope the film touches everyone who watches. I would also like to thank the cast members.”

Semih Kaplanoğlu won the Best Script award with “Commitment Hasan”, Emel Göksu won the Best Actress award for her role in “Corridor” and Mücahit Koçak won the Best Actor award with his role in “Between Two Dawns”. Accepting the Best Script award, Semih Kaplanoğlu stated, “Scriptwriting is a very difficult sphere for me. I just started writing therefore this award is very important for me.” Winner of the Best Actor award, Mücahit Koçak said, “There are many people to thank. Firstly, I would like to thank Selman. I acted but we built this together. I also thank my other fellow cast members.” Emel Göksu received her award from the jury member actress Vildan Atasever and said, “Firstly I would like to share this award with my acting partner Ayşe Demirel. I received this award because of her strong acting skills. I would like to thank my director and his assistants as well.”

Those who shot their debut or second film were evaluated for the FİYAB Best Producer Award. Zeynep Koray, Yunus Yunusoğlu and İris Tahhuşoğlu were given the Best Producer award for “Corridor” by the FİYAB Jury consisting of directors and producers Cafer Özgül, Seyid Çolak and Yiğit Nalçacı, while the FİLM-YÖN Jury consisting of Orçun Benli, Hüseyin Karabey and Atalay Taşdiken gave the FİLM-YÖN Best Director Award to Sinan Sertel for “The Hero In Me”. As their reason, the jury stated, “To help young directors in the beginning of their careers who will contribute to the content of festivals and bring a new perspective to cinema.”

For the first time this year, to support filmmakers in the beginning of their careers and their new films, 50.000 TL worth the Best Debut award was given to Selman Nacar’s “Between Two Dawns” with the contributions of Akli Film. In his acceptance speech Nacar said, “I would like to thank my crew. Films, festivals and cinema happen because of them. It is amazing to be able to watch the film together with the audience. Festival culture is very precious. I would like to thank everyone for being able to watch and make films together. I would also like to thank the jury.”

The Best International Feature Award Winner Is “Ripples of Life”

The International Feature Competition Jury consisting of Anne Delseth, Kamyar Mohsenin, Hilal Baydarov, Svetla Tsotsorkova and Yoshi Yatabe gave 50.000 TL worth Golden Dolphin award to director Wei Shujun’s “Ripples of Life”. At the competition, Nora Rainer-Miscinyei won the Best Actress award for her role in “Things Worth Weeping For” and Gusztav Dietz won the Best Actor award for his role in “Wild Roots”.

The International Feature Competition Jury gave Kiro Russo the Best Director award for the film “The Great Movement”. The Special Jury Prize was given to Juja Dobrachkous with the film “Bebia, My Only Desire”.

Total of 70.000 TL worth awards were given at the 9th Bosphorus Film Festival’s Short Fiction Competition and Short Documentary Competition. The jury consisting of Eylem Kaftan, Mahdi Fleifel and Murat Uğurlu gave the Best Film award to Arda Ekşigil’s “The Diamons Sea” in the national competition. The reason was stated as “She was able to put out amazing directing narration, unique characters with a melancholic comedy.” In the international competition, Leonardo Martinelli’s “Neon Phantom” won the Best Short Fiction Film award. The jury stated the reason as “We selected this film because he was able to make visible the ordinary heroes we come across every day and do not even notice in a grotesque musical form.”

For the Best Short Documentary Film award in the Short Documentary Competition, jury members selected Nuray Kayacan Sünbül’s “The Bishwa Ijtema” for the national and Anna Artemyeva’s “Don’t Hesitate to Come for a Visit Mom” for the international. Samir Karahoda’s “Displaced” won the 25.000 TL worth Ahmet Uluçay Grand Prix. The jury stated their reason as “Presenting his countries faith in comparison with the faith of a tennis table with a plain and graceful allegory, and removing borders of documentary and fiction while doing so.” The 5.000 TL worth Istanbul Media Academy Young Talent Award winner has been Nuri Cihan Özdoğan’s short film “Same Night Different Blue”.

Organized with the official partnership of TRT, Bosphorus Film Lab winners were also announced on the evening.

Jury members consisting of Georges Goldenstern, Kamila Morgisz and Faruk Güven evaluated eight projects in the Pitching Platform. In the Pitching Platform, TRT Co-Production Award was given to “Beyond Seasons” produced by Olena Yershova and directed by Mustafa Kara, Postbıyık Color Correction Award was given to “Unfruitful Times” produced by Burak Kaplan and directed by Doğuş Algün.

Jury members consisting of Elma Tataragic, Aiste Račaitytė and Serdar Can evaluated six projects in the Work in Progress Platform. In the Work in Progress Platform, 25.000 TL worth Republic of Turkey Ministry of Culture and Tourism Special Award was given to “To Carnations A Song” produced by Halil Kardaş and directed by Bekir Bülbül, the CGV Mars Film Distribution Award was given to “Tulliana” produced by Alara Hamamcıoğlu, Sinan Kesova and Arda Çiltepe and directed by Orçun Köksal.

Republic of Turkey Ministry of Culture and Tourism Special Award: TO CARNATIONS A SONG